Testosterone is a unique chemical structure that has the capacity to promote the formation of bone and muscle in the body. Testosterone is also referred to as an androgen, which means “male producing.” And, certainly, the hormone is an essential component of maleness.

In fact, there’s a sense in which it is testosterone that makes men male. You see, all fetuses start out anatomically female. If, however, the sperm that reached the egg carried a Y chromosome, then, sometime in the second month after conception, the male chromosome will cause the embryo’s newly developing genital ridge to secrete testosterone. As a result, the male sexual organs will begin to form. Those organs are well equipped to produce testosterone. Specialized cells in the testicles called Leydig cells become the male’s main factory for testosterone production and eventually form approximately 20 percent of the total testicular mass.

In adult males approximately 90 to 95 percent of testosterone is produced in the testicles by the Leydig cells, and the remainder is secreted as yet another product of the adrenals, those small, spectacularly potent glands we discussed a few pages back. In women, approximately half the testosterone produced comes from the ovaries and about half from the adrenal glands. Some is also created elsewhere in the body by conversion from the adrenal hormone, DHEA.

During the menstrual years, these various sources of the male hormone give the average woman a level about one-tenth as high as that of the average man. But, by her mid-thirties, a woman’s adrenal production begins to fall off dramatically, along with her sex drive, although sometimes not right away. That’s because, as the ovaries begin to fail, the body sends surges of gonadotrophins to promote estrogen production. Frequently, all they can manage to do is increase testosterone, an estrogen precursor. Thus, there may be a temporary rise in the male hormone. If, at that point, a woman goes on estrogen replacement, however, testosterone will quickly fall. This is yet another reason why accurate and targeted replacement dose of testosterone as an accompaniment to estrogen replacement makes very good sense for menopausal women.

Puberty Throughout childhood the male is producing rather small amounts of testosterone, and his Leydig cells are relatively quiescent. Then, at around thirteen years of age, puberty strikes. The control panel in the brain has sent signals to the testes to pour out the testosterone. Teenage girls receive similar instructions for estrogen (and, secondarily, for testosterone). All the changes we’re familar with begin to occur. In teenage boys the sexual organs enlarge, pubic and axillary hair grows, the voice deepens due to the thickening of the vocal cords, there is a thickening and darkening of the skin, an enlargement of the skeletal structure, a considerable increase in musclature, and, of course, the onset of sexual sensations and desires. There’s nothing subtle about testosterone at puberty. This is a blowtorch of a hormone. Teenage girls have their own quite apparent changes. The result, as we’ve all noticed, is that boys and girls lose the rather androgynous appearance of children and are suddenly transformed into two distinctly different body types. By their late teens, males are at their lifetime high levels of testosterone, typically 800 to 1200 ng/ dl when blood testing is done. Those levels usually stay fairly constant for the next ten to twenty years. Then they begin to decline, according to one study, at an average rate of 1 percent a year for total testosterone and 1.2 percent a year for the very important free testosterone. That, however, is no more than a statistical average.

Male testosterone decline is highly variable and dependant on many interlocking individual factors. Some men are in the andropause by the time they’re forty and measure only 200 to 300 ng/ dl when tested. Other men are still at 800 ng/ dl at seventy. Why does testosterone decline? The rest of this chapter will give the first part of that answer; the next chapter, the surprising last part. 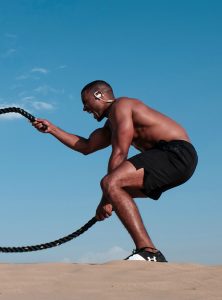 At most, men regardless of age think their testosterone is low.

Most men over 35 have tried a testosterone supplement with no real results.

Creating a healthier lifestyle is a long and complicated road to increase testosterone levels.

T-Rize offers men of all ages from 18 to 80 an opportunity to increase their testosterone levels simply by consuming the product for 30 to 90 days.

Men in our study, of all ages, who were low in body fat and physically active had even higher T-scores than those who were sedentary, overweight, smoked and drank alcohol.

All participants did well however.